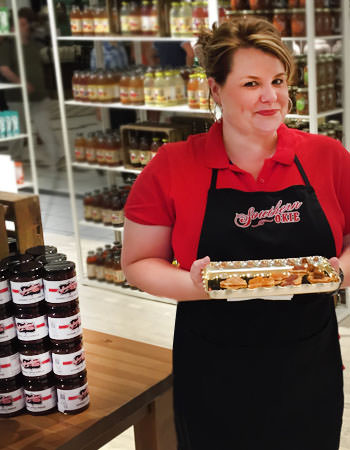 Gina Hollingsworth does not speak German, nor does she have a background in the food industry. Yet two years after starting Southern Okie Gourmet Spreads in her kitchen, her fruit spreads were in two German stores, in addition to an ever expanding domestic footprint.

In addition to having a delicious product, Hollingsworth did her homework. First, she took advantage of a food entrepreneur boot camp at Oklahoma State University where she learned the basics of starting a business. Then she started working with the Oklahoma Department of Agriculture who introduced her to the Southern U.S. Trade Association.

In 2014, Southern Okie exhibited in the SUSTA pavilion at the Summer Fancy Food Show. There, she met a German food broker who would eventually become a client. In July 2015, Hollingsworth and her husband were on a plane to Berlin for a four day promotion at KaDeWe, an upscale department store that sells everything from high fashion to gourmet food items, like Southern Okie. The following September, she received an order from another gourmet German retailer, Feincast Bohm, in Stuttgart.

“I have met so many international buyers through SUSTA’s events, like the Mexican and Costa Rican trade mission to Oklahoma City as well as PLMA and Fancy Food. It is great exposure and a fantastic learning experience. None of this would be on my horizon without the Oklahoma Department of Agriculture and SUSTA,” said Hollingsworth.