Chances are that if you order a side of fries at a restaurant, you need to specify whether you’re asking for white potatoes or sweet potatoes. Food trends that support the consumption of more healthful, colorful and unique foods have helped to encourage sales of sweet potatoes in the form of fries, chips, ready-to-cook and heat-and-eat preparations, expanding consumption of the orange tuber well beyond the holiday table.

Domestic consumption of sweet potatoes has grown considerably since 2000 with annual per capita availability (a proxy for consumption) rising from 4.2 pounds to reach a record-high 7.5 pounds in 2015. The marked rise in domestic demand has been encouraged by promotion of the health benefits of sweet potatoes – rich in vitamins A and C, high in fiber. Expanded demand has also been supported by the increasing variety of sweet potato products available in restaurants and for home preparation.

New crop production hit a slight snag in early October of 2016, when Hurricane Matthew arrived in North Carolina. The storm brought record flooding to many areas of the State, which is the largest U.S. producer of sweet potatoes. Although some loss was inevitable, greater damage was avoided with much of the crop having already been harvested when the hurricane hit.

Beyond U.S. borders, consumers are increasingly enjoying sweet potatoes and, like North Carolina, several of the other key growing States enjoy access to southern ports that provide a locational advantage for meeting export demand. With expanded sales to markets that include Canada and the United Kingdom, aggregate U.S. exports have steadily risen in recent years in parallel with climbing domestic demand.

In 2015, U.S. sweet potato exports reached a record-high 409 million pounds and exports for 2016 are poised to reach approximately the same level. Both internationally and here in the U.S., sweet potatoes are increasingly becoming a colorful addition to holiday-and everyday-dining tables.

To find out more, follow market analysis and outlook on vegetables and other commodities on the ERS website. 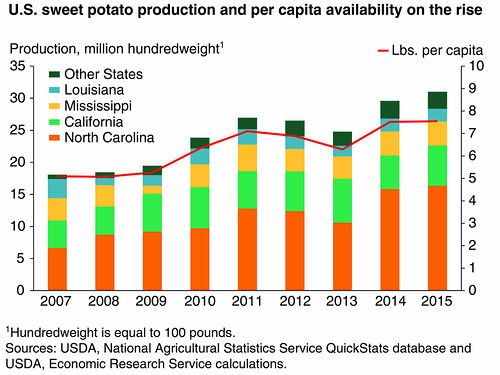